Within the area a further 11 burial mounds and 10 round stone settings can be seen. They vary in size between 6 and 33 meters in diameter. These graves were probably raised over members of different generations of the same family. Most of the graves were plundered long ago, which can be seen from the hollows in them. 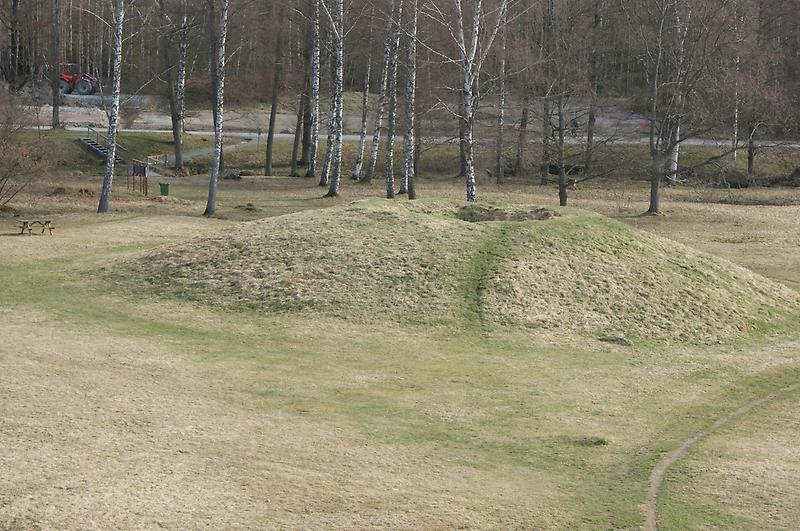 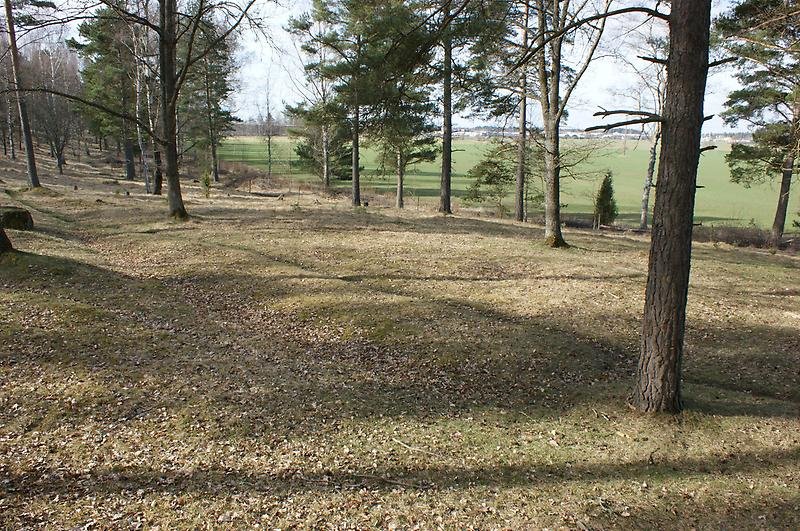 The grave field on the ridge. 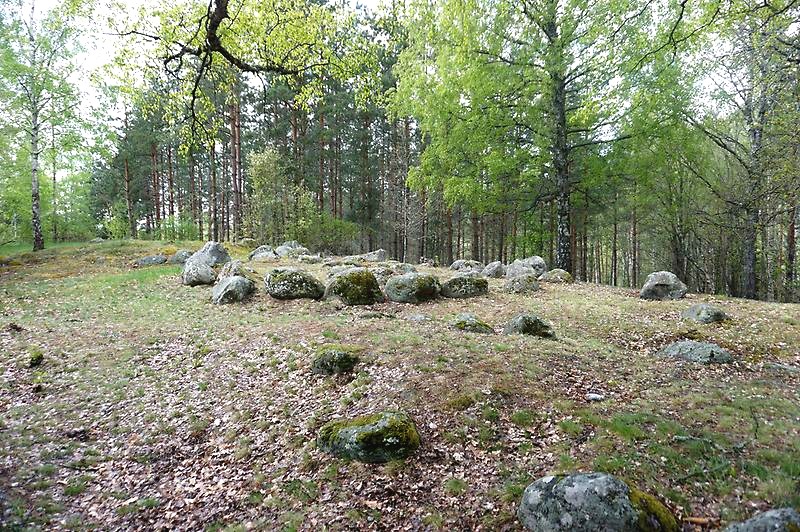 Paving on the ridge.

In the Badelunda area there is a very large number of known prehistoric remains from the Iron Age, 500 BC – 1050 AD. Just on the ridge between the church and the E18 there are around 500 visible graves. In addition there are all those graves which are hidden under the ground. There must be at least 2,000 graves along this short stretch of the ridge.

There has been lots of activity along the ridge. The farms must have been near to each other. Crops were cultivated on small fields, cows and sheep grazed on pastureland, pigs and hens wandered freely around the farm steads, children ran around and played while the adults did the daily work of the farm. The settlements lay on what is today arable land. The small fields lay at the edge of the ridge and the pastureland lay further away from the ridge.

The grave field on the ridge

On top of the ridge 200 meters south of Anundshög there is a small grave-field with 1 mound, 9 round stone settings and 1 ship setting. They are probably from 500 – 1000 AD.

The form of a normal grave says nothing about who lies there. Women and men were buried in both mounds and stone settings. The funerary gifts usually consist of several personal possessions – jewelry and clothes buckles and perhaps some extra item. Food for the journey to the kingdom of the dead complemented the usual contents of a grave.

The ship setting is somewhat different from the large ones at Anundshög. It is built with low stones and filled with stones and earth. We can guess that it is a ship’s master or a steersman who is buried here

Gold was found in a women's grave from the 300s in Tuna, near Anundshög, in the early 1950s. The find can be seen at Västmanland County Museum in Västerås.

The women and gold treasure of Tuna

The Swedish grave which has contained the most gold was found near Anundshög. In a woman’s grave from the 4th century AD there were various gold items which together weighed 337.6 grams.

A house was built at the beginning of the 1950s about two kilometres to the east. When it was discovered that the house had been built on a grave field the site was excavated by archaeologists. There were graves from the 4th century till around 1050 AD which means that the grave field had been used for many generations. In the grave field there were eight boat graves, a very notable type of burial used for especially important people. In one of the boat graves the dead person was placed in a boat along with a number of items, for example household utensils for food and drink, jewellery, beads, a knife and a pair of scissors. It was women who were buried in all eight of the boat graves in the Tuna grave field.

A neck ring, two arm rings, two finger rings and pins of gold were found in Grave X, the grave with the richest funerary gifts. All of these came from Denmark. There were also buckles, a ring and two spoons in silver, items in bronze, so called Hemmoor containers, a glass goblet and beads. Who was this Danish woman?

Female seers?
Who were these women and where did the gold treasure come from? Interesting new research findings indicate that the women in Tuna had a high status and that they had leading functions in a cult context. For example, the women in the boat graves are placed in the middle of the grave-field while the men are buried at the edges.

Finds such as a seer’s staff, fine materials with silk ribbon, amulets and jewelry can indicate that they were so called oracles that could see into the future. Some amulets, votive rings and large buckles have connections with Freja, the goddess of fertility. The Freja cult had aspects of shamanism and prophecy: ecstatic acts where the cult leader can see both backwards and forwards into time and into other worlds.

From far away
Some of the finds are similar to ones made in England. Some of the coins come from Germany. An analysis of the quality of the gold shows it originates in the Middle East. One theory is that the woman in Grave X is a Danish princess. Two of the women were buried during the Viking era and DNA tests show that they were related to each other, mother and daughter or sisters.

Grytahögen is another large royal mound outside Västerås. It is 41 meters in diameter and 6 meters high. In addition there are several more graves nearby.

A legend, known from the 17th century, is associated with the mound. A maiden lived in ‘Tibble Palace’ on Badelunda ridge. When she went out to meet her beloved she was spirited away by a troll. Her beloved then killed himself by falling on his sword, after which the maiden was carried out dead from the underworld. The sword and the dead couple were laid on a golden carriage. According to the legend the carriage is in Grytahögen. If it ‘in the course of time’ is removed from the mound ‘the sword will pierce the one who comes first’.