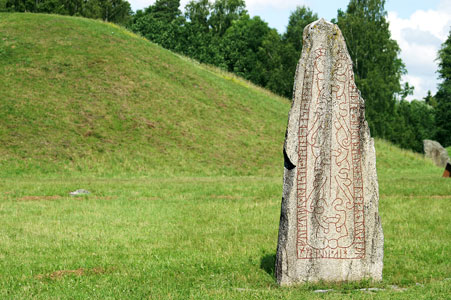 Folkvid was a powerful man in Badelunda at the beginning of the 11th century. He paid for the road past Anundshög and marked it with a row of standing stones. Folkvid also paid for the impressive rune stone to tell the world for all time about his son, his road and himself.

It is certain that it is not Anund who was buried in the large mound. The name Anund was very common during the 9th and 10th centuries and the mound is probably from the 6th to 8th century. Heden and Anund were probably brothers in arms. Vred both knew the runes and was skillful at carving them and he produced this remarkable rune stone. He has carved the runes around a picture which is unique among Swedish rune stones.

We do not know how the picture should be interpreted, but it could perhaps be the forms of a woman and a man which are intertwined with each other. The people of the Viking era would have understood what Vred intended with his pictures.

Within the grave-field area there are many standing stones. A number of these form the so-called ‘rune stone road’. The majority however, mark graves. Perhaps the graves marked by stones are somewhat simpler than those concealed under the large mounds. Graves with raised stones are usually dated to the first centuries AD. None of the graves of this type has been excavated within the Anundshög area. 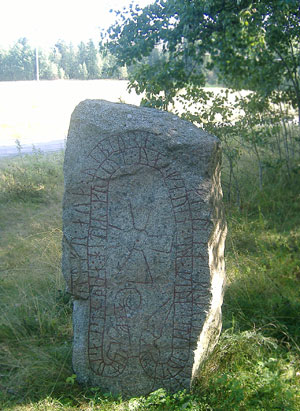 The rune stone at Fågelbacken

A rune stone was found in 1986 at Fågelbacken, 3 kms north of Anundshög. It has the text “Tav had this stone raised after Grimmund. He journeyed – Vidfast son – to the east … Ulv and Vibiorn … Kettilas made ‘crossing’ on …” The rune stone was raised by a causeway – ‘crossing’ – over marshy land. Grimmund died on a journey to the east. Perhaps he was one of the companions of Ingvar the far travelled who organised a famous campaign to the east in the middle of the 11th century. Most of those who accompanied him died.