The area through the ages

Around Badelundaåsen, ancient trade routes and waterways met. Over the centuries, the area became a cultural center for the whole of western Mälardalen. This is where things were collected for things in the Middle Ages. This is where people sacrificed to their gods and later prayed to the new Christian god. It was here that they buried their dead, large and powerful in burial mounds and stone ships or simply and insensibly along the ridge, according to power and position.

The greatness period lasts throughout the Iron Age, ie from about 500 BC to the 1100s AD. Today, the area is therefore one of Sweden's most extensive ancient sites.

Time bar which from below and up illustrates the historical eras of the Stone Age (green), the Bronze Age (yellow), the Iron Age with the Viking Age (red), the Middle Ages (blue) and newer times (green). Photo: Ingela Lindestad 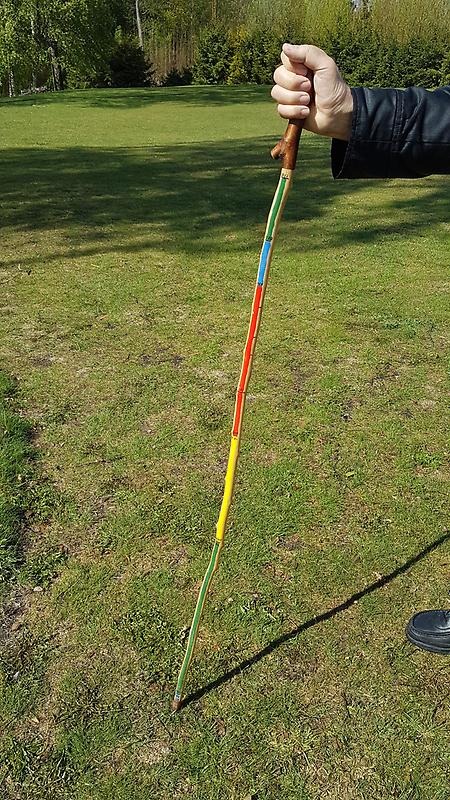 During the early Bronze Age, around 3,500 years ago, what is now the Anundshög area lay at the furthest point of a bay coming in from the sea. Between the place where the mound itself stands today and Badelunda ridge there was a small inlet.

During archaeological excavations in 2004 the remains of a landing stage were found which are 3 200 years old. Many of the rock carvings from Västmanland contain ships and for a society for which sea trips were important the settlement was perfectly situated. The landing stage lay in a protected inlet and all the resources of the sea beyond were available to the settlement.

The ancient remains around Anundshög clearly show that the area was the core of a center of power during the Iron Age. We may never know how much power was gathered here, but it was a royal power.

From the site, the king has controlled the transport in the immediate area. Large areas of land suitable for breeding livestock were available.

The place was quite well protected as it was not directly adjacent to the sea. On the road marked by erected stones, mighty followers met and passed on Eriksgatan during the end of the Iron Age and the early Middle Ages.

Iron Age farms around Västerås
In the last decade a number of settlements around Västerås have been excavated. They are farms from the Iron Age which were situated on what is today arable land. The farms seem to have consisted of 2 – 3 buildings which were 10 – 40 meters long. Several such groups of houses are often found together when excavating. It looks as if the farms were moved around within a limited area. The reason for this can quite simply be that the buildings have a limited life-span. It was decided to demolish them and construct new buildings next to them. There are usually no archaeological finds in them which show that they were abandoned in an orderly fashion. Near the buildings archaeologists can document the remains of fences, wells and middens. In the wells wooden constructions have sometimes been found and a ladder has even been found in a well outside Västerås.

Settlements
It has been a bustling life along Badelundaåsen. The farms have probably been close. They have farmed on small fields and had cows and sheep in the pastures. Pigs and chickens have been around the farms. The children have run around and played at the same time as the daily farm life has been going on. The more significant farms lay on the edge of the ridge. Out on what is today arable land is low, even more farms. The small fields were on the ridge and the pasture was further out from the ridge.

The ridge south of Tibble
South of Tibble farm house the ridge is preserved as it looked in prehistoric times. There are a large number of graves and other remains worth seeing from the Iron Age. The Iron Age farms lay on the west side between the ridge and the arable land. The old main road passes between a grave-field and the site of a farm. Up on top of the ridge on the other side of the road there is a large grave-field with 40 visible graves from the Iron Age. The Iron Age farm stead probably lay on the slope where there are oak trees down towards the arable land.

At the beginning of the Middle Ages, it seems that someone has deliberately tried to wipe out this center of power. The shipbuilding was destroyed, the rune stone was thrown down and the royal goods that must have been on the site were cut up.

Badelunda church
The oldest parts of the church, today’s chancel and the eastern part of the nave were built in the 13th century. This small church was not always large enough so at times wandering preaching monks could stand outside in the churchyard and talk to the congregation.

Church building in the Medieval Ages
Building a church was a major event in a parish. The whole parish combined to pay the craftsmen who were employed. The farmers themselves also put in days working on the building which sometimes took many years to complete. The oldest parts of Badelunda church were built in granite and the later ones in brick. Much could be made on site but furnishings such as the font and triptych were bought. Usually churches were built in stages. Badelunda church’s sacristy was built in the 14th and the porch in the 15th century. In the middle of the 17th century the church became far too small and was extended to the west.

Interior fittings
The triumphal crucifix from the 14th century together with a dish for communion wafers, are the oldest items in the church. The beautiful pulpit was made in the 1650s by Israel Snickare from Västerås. In the porch there are the remains of wall paintings from the 15th and 16th centuries.

The battles of Badelunda
There have been two battles in the area around Badelunda. The first was during the final phase of Sten Sture the younger war against Denmark (1512-1520), the second during the liberation war against Christian II and the Danes (1521-1523). Over the years, many armbrush arrows, so-called arrow arrows, as well as a number of other tips have been found, for example, on Tibble meadow and in the Jute cart.

The first battle occurred on March 29, 1520. The Deputy Governor Sten Sture had fallen a few months earlier. The Swedes succeeded, under the leadership of Erik Pedersson, to give the Danish army great losses on their way to Uppsala, where, however, the Swedish army was defeated. The war was lost.

The second battle occurred on April 29, 1521 when Gustav Vasas here defeated the Danes at Badelundaåsen. The Danes retreated to Västerås, which was besieged by the Swedes until May 20, 1522, when the Danes gave up. The victory in Västerås was of great importance for the coming battalions before Sweden was completely liberated. Gustav Vasa was elected king of Strängnäs on June 6, 1523.

After the Middle Ages, the Badelunda area became like most of Central Sweden, a rural area that was entirely dependent on what the farmhouses provided. The population consisted mostly of peasants and their house people. There was not as much arable land and forest as today, but plenty of meadows and pastures.

During the 18th century, there were both windmills and water mills here, in order to utilize the grain and grind flour.

If you follow Badelundaåsen's nature and cultural trail, you can find out more about who has lived in the area and how they have lived.